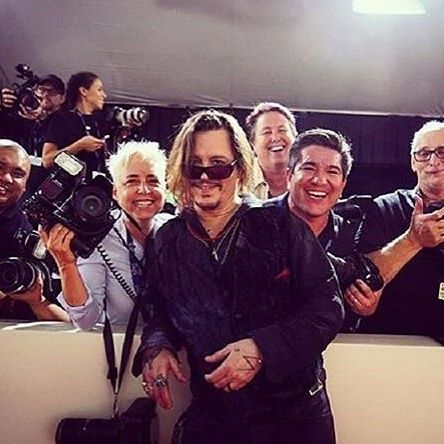 There was drama on the Eurostar trains today when the journey had to be halted before it entered the channel tunnel. Luckily Hollywood superstar Johnny Depp was on board to keep the staff entertained while the problems with the train were resolved.

The Pirates of the Caribbean star seemed happy to pose for photographs with Eurostar staff and passengers while the train was being held at Calais station. It is thought that Depp was heading to London from Paris to promote his new movie Alice Through the Looking Glass. Depp was holding what looked to be a glass of champagne as he happily had photos taken while the staff attempted to resolve what was thought to be a fire in one of the engines.

This is not the first time that Depp has hit the headlines recently. He and his wife, Amber Heard, were forced to make a very public apology for secretly smuggling their dogs into Australia without following the quarantine protocol. Though, while doing promotion for the new film he has mocked the apology video that he was requested to make by the Australian authorities.