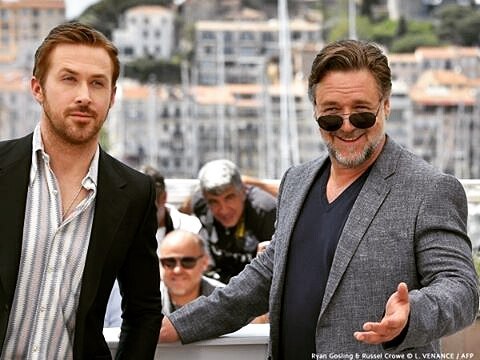 Ryan Gosling was looking every inch the true gentleman when he appeared on the red carpet in Cannes for the photo call for his latest Hollywood film The Nice Guys. Gosling, 35, has recently become a father again after his partner Eva Mendes gave birth to the couple’s second child. Ryan was joined on the red carpet by his pal and co-star Russel Crowe who stars along side him in the new film.

The pair looked relaxed on the red carpet as they joked around with each other and the cameras. In a recent interview the pair both shared stories of near death experiences which weirdly both happened to involve snakes. Crowe revealed how he came across a snake when he was on a date with a girl in Australia. While Gosling said after moving to Florida when he was a child he stumbled upon a snake and picked it up, without realising the dangers of doing so.